SNH48 is starting to eliminate AKB48 songs from its Best50 Request Time concerts. Fans are only allowed to choose a select few songs from the non-original EPs and stages this year. 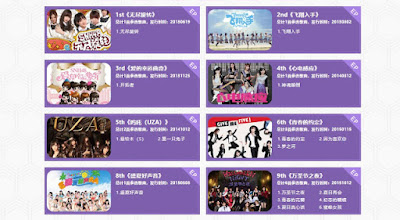 SNH48 GROUP fans have been able to choose their favorite idol songs to be displayed on the 5th Request Time Best 50 SNH48 program.

As usual all songs from singles, albums and theater performances can be selected through the voting page.

But this year is a little different, AKB48's songs that SNH48 has brought have been limited to selected, these songs to be trimmed and only a few of the many songs have been displayed.

This is known when you open the voting site (https://vote.48.cn/) and enter the list of songs that can be selected will find the original SNH48 GROUP song that dominates.

Even SNH48's only album 'Mae shika Mukanee / Yixin Xiangqian (一心 向前)' is not on the list. Single of SNH48's from AKB48 songs such as Heavy Rotation which contains Sakura no Kini Narou and RIVER songs can be selected only the main song of the single.

At the SNH48 theater performance from AKB, songs that can be selected are only popular songs.

The total AKB48 songs that can be selected this year are only 66 of the hundreds that have been released by SNH48 Groups.