The NMB48 concert in the framework of the successful Asia Tour was held in Guangzhou and Shanghai, China. The event was held on October 5 at Beilei Theater Guangzhou and October 7 at Bandai Namco Shanghai. 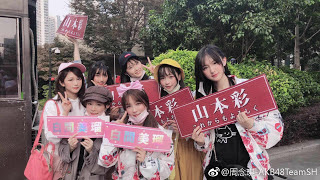 This is the first time the NMB48 group has held a concert in China without AKB48. This concert attracted members of AKB48's newest sister group in Shanghai, AKB48 Team SH.

Some AKB48 Team SH members watched the NMB48 concert held in Shanghai. Judging from some photos uploaded by one Team SH member named Wang Yuduo, they were seen together watching the concert.

In uploading other photos, they watch in the upper section for invited guests and important parties.

But what is unfortunate is that none of the AKB48 Team SH members interacted with NMB48 members both post and pre-concert. Whereas as a sister group, of course they are allowed to take pictures.

This made the 48 Group fans there compare AKB48 Team SH and SNH48 meetings with NMB48. At one of the variety shows between Japan and China, SNH48 and NMB48 were invited to appear and the two groups looked very good and sweet.

Even Liu Jiongran 'SNH48' (once) had time to play a game with Takei Sara NMB48. Just for information, although SNH48 has been independent, it is still dubbed as the original sister group of AKB48.