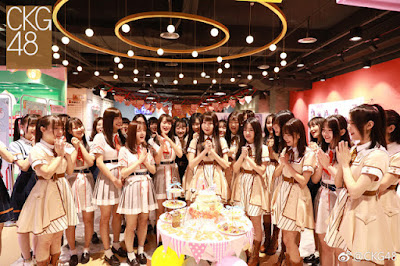 Actually CKG48's first birthday fell on October 28, where they held the group inauguration and the opening of the theater.

Some programs such as blowing candles with echoers, announcements of trainee promotions to the team and MVP were held. Event was in a special performance combined with Team C, Team K, and the first birthday special Trainee.

Before the candlelight event all members of CKG48 took photos together in front of the Star Dream Theater, a new landmark in Chongqing City.

Next the members gathered in the hall below the theater to blow candles with fans and staff present.

The atmosphere touched when they wanted to blo out the candle, which was asking for hope / wish and prayer for CKG48 and SNH48 GROUP going forward. The members present gave cakes to each other's members and fans.

Members who have the most fans come to the theater to Ran Wei Team C and Wang Lujiao Tim K.

Large-scale promotions of trainees to the team were also announced, as many as 7 trainees were promoted to two teams.

Kang Zhaowei went to Team C, while the other six were Cao Ludan, Dai Ziwei, Fang Qi, Guo Shuang, Peng Yuhan, and Zhou Tongran to the formation of Team K.

One member of CKG48 from Team C named Bai Xinyu was announced to have a double position on BEJ48. The consideration of the kennin to BEJ48 has been decided between the two group management carefully.