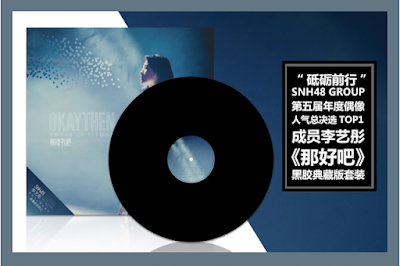 This single was released yesterday in two versions. For the first time, SNH48 released a single in the vinyl version. In addition to this version, SNH48 also prepared this single version of Nahao Ba's physical CD.

At this price, besides vinyl they also get a photopack, but handshake tickets can only be obtained if you buy 2 sets.

For the physical CD version, fans will get a lyric and photopack book. The price is 48 Yuan or approximately USD 7.

Okay Then's song than having a cute genre is perfect for people who are melancholy or upset. While the song Like A Star has a mixture of American and European pop music. Get the SNH48 EP and Li Yitong on the SNH48 GROUP shopping website and their group theater base.