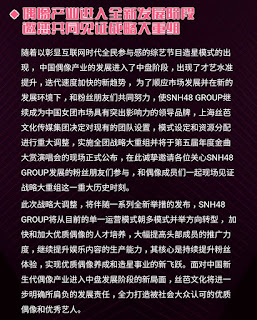 SNH48 Group announced today that they will be doing a major restructuring of the whole group.

The final details of the major restructuring exercise will be announced on January 19 at the Guangzhou Gymnasium during the Best 50 event. The fans fear it will be disbandment for some group like SHY48 and CKG48 for not doing well enough since their debut.