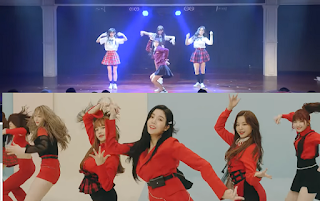 Every performance is definitely a member who has the right to give a special appearance to be shown to fans.

At that time, Ye Xiaomeng chose to show one of the South Korean songs belonging to the IZ*ONE girlband titled La Vie en Rose.

Accompanied by three friends, Ye Xiaomeng performed a dance cover of the song with an English version of the audio song popularized by KPOP fans.

The video on the appearance of GNZ48 performing La Vie en Rose dance was suddenly viral after being uploaded by Monica Ardhea on Youtube (Links: https://youtu.be/sDGtOITZkM4).

Spicy comments and invective filled the comment column in the video. "I don't think there's a dance intention !! So BAD", write an account called fyi sakura.

Other rather harsh comments also appear such as "That's so slow dance", "Bro, my group can't run lol".

There are also those that compare with AKB48's sister group in Shanghai, AKB48 Team SH. "AKB48 TEAM SH BETTER THAN SNH48GROUP", "Still the AKB48 TEAM SH which covers O'MY", net critics GNZ48. The video gets so many dislikes.