JKT48 will release their newest single, High Tension. The single was the result of the selection of the 20th single member held on November 17th. On this single, Cindy Yuvia will be the center for the very first time. As announced, the single High Tension will be released in 2019. 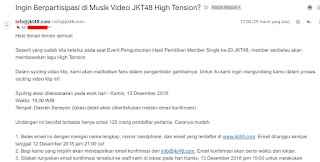 Through official e-mail account, the management of JKT48 (info@jkt48.com) sent a message in the form of an invitation to participate in filming to the email address of their fans. In the invitation, JKT48 also wrote that filming would take place from Thursday, December 13 to Sunday December 16, 2018 at 19:00 WIB with locations in the Senayan area, South Jakarta. However, the invitation was only limited to 120 fans. Fans who want to participate can send their name, phone number and email. Those selected will be contacted again by JKT48. 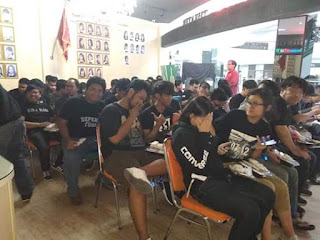 The first phase filming was done and it turned out that the location was in the JKT48 Theater itself. Selected fans must bring a lightstick, wear black clothes and not be allowed to wear shorts. The most important thing is that you don't take pictures or videos during the event. But since it's Indonesia, some of them still take photos and show a special single High Tension uniform as shown on the side. Gracia looks wearing an LED patterned shirt.