MNL48 has just released the MV Gingham Check on October on its official Youtube channel.

As we know the song Gingham Check is indeed popular among 48 Group fans.

The song was sung into Tagalog by 16 members of the Under Girls election yesterday.

There are many unexpected things in this MNL48 MV.

As can be seen in the comments column, this MNL48 Gingham Check video has been criticized by many fans.

Many felt the MV Gingham Check did not live up to their expectations with the teaser video that was released.

In this MV, the Under Girls members did their best, even wearing different costumes.

However, what made them disappointed was the video taking and editing by the MV producer.

Many protested that MNL48 used the green screen technique for the background of the MV.

In fact, almost all backgrounds when members dance using these techniques.

Fans assume that the editing of this technique is so neat that it becomes dissatisfied with the results.

Not only in the Philippines, floods also occur in Indonesia.

JKT48 has adapted the song Gingham Check into Indonesian and also has a music video.

Of course, many fans will come to JKT48's MV Gingham Check. 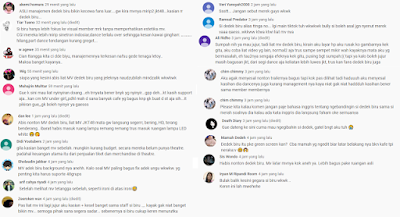 You will be surprised when you open the JKT48 MV Gingham Check MV commentary.

There are some sarcasm and scathing criticisms for MNL48's that come from Indonesian.

Some even insulted the MNL48 music video. The commentary addressed to MNL48 is very scathing.