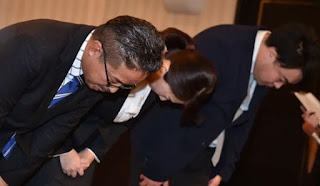 They are both sponsored NGT48 over the past years, but its looks like comes to an end probably due to embarrassing scandal happened to Yamaguchi Maho involving internal folks.

While Yukiguni FM, one of radio station in Niigata have cancelled and deleted their schedule of inviting NGT48 members by the end of this month.

AKS have held a press conference and said that this Yamaguchi Maho assault case is not a big deal anymore as two of alleged suspect have been arrested, they believe no NGT48 members involved that much in this incident and will protect all of them in the future.

While theatre manager Imamura Etsuro position has been replaced, Imamura reportedly not fired just moved to Tokyo to take a new role at one of Sakamichi group given by AKS.