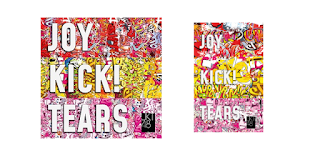 On this album, JKT48 does not display the members' photos on the cover but rather the pattern of each team's latest greatness uniform.

Joy Kick! Tears was released in two versions, a music card and a physical or regular CD.

In the regular version JKT48 inserts 1 CD, voting code, and 1 photopack while your card version can get 3 songs (only new team songs) or photos with a bonus handshake coupon and voting code.

There are two old versions of the song that have never been released, namely the Maturity Train (Otona Ressha) and Together with You, Pelangi dan Mentari (Kimi to Niji to Taiyou to) which are delivered by the senbatsu album line.

This album can be found at JKT48 Theater or the official store website.

However, the total sales figure may be far from the expectation of only 3120 copies in the first week of JKT48 4th Album sales.