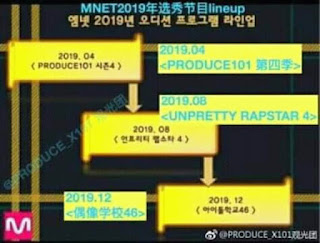 Mnet Korea's survival program turned out to be in demand in various circles in the world. After PRODUCE 48 was over, the collaboration program with Yasushi Akimoto made Mnet look a lot for the JPop and KPop Lovers. Besides Produce, a well-known survival program from Mnet namely Idol School.

Idol School is an event for reality female vocal group survival on Mnet. The program aims to form a female vocal group of 9 out of 41 female participants, training them by singing and dancing for 11 weeks. The first season managed to debut a girl group named Fromis_9.

The second season of this survival program turned out to be a hot conversation. Rumors say that Idol School's second season will collaborate with Japanese idol group Sakamichi Series which consists 'Nogizaka46, Keyakizaka46, Yoshimotozaka46 and Hinatazaka46' so that its name will change to 'Idol School 46' like Produce 101 to Produce 48. The rumors is getting stronger after the circulation of Mnet's plan in 2019 which explains that Idol School 2nd Season will begin in December 2019.

Nogizaka46 is a girl group "rival" of AKB48 which is sheltered by Sony Music under the same producer Yasushi Akimoto. Not much different, Nogizaka46 also has a sister group including Keyakizaka46, Yoshimotozaka46, and Hinatazaka46.