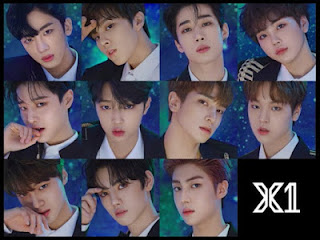 X1 (엑스 원; egseuwon) is a newcomer boy group formed through the Produce X 101 survival program. Just like the previous seasons, Produce X 101 was attended by 101 trainees from various agencies and independent, including trainees who had debuted, both any solo debut as a member of the boy group. After 12 episodes, 11 trainees who debuted as X1 members were selected, namely Han Seung Woo, Cho Seung Yeon, Kim Woo Seok, Kim Yo Han, Lee Han Gyul, Cha Jun Ho, Son Dong Pyo, Kang Min Hee, Lee Eun Sang , Song Hyeong Jun and Nam Do Hyun. The plan of this group will debut on August 27, 2019.

Fans do a vote about who is the most handsome among X1 members? And here is the final results in no order: