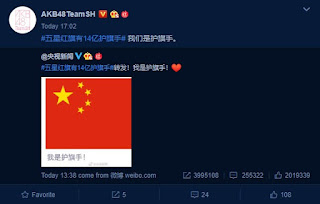 AKB48 Team SH is an AKB48 sister idol group from Japan which is shaded by AKB48 CHINA. As we know, AKB48 CHINA with AKS instruction can form groups in China, Hong Kong and Macau.

The influence of AKB48 Team SH from AKB48 itself is very thick and strong. As we know also Japan and China do have a dark history and rarely seem to get along. However, despite the very 'nuances of' networking, 'AKB48 Team SH gave strong support to the Chinese government and opposed the demonstrations by the Hong Kong people.

This is evidenced by the Weibo AKB48 Team SH posting today. CCTV News uploaded a picture of the Chinese flag followed by a very nationalistic sentence. "# The five-star red flag has 1.4 billion flag bearers #. Come forward! I am the flag bearer," wrote the CCTV News account.

This sentence is intended for their beloved country China who feel mocked by the demonstrators. The SH Team continued the CCTV News upload followed by the hashtag as above and it was written that "we (AKB48 Team SH) are flag bearers.

This was also done by other AKB48 Team SH members such as Shen Ying, Zhu Ling, Li Shiqi, and others. Although formed by Japan, AKB48 Team SH loves their home country.

This is different from the Hong Kong Pocari Sweat action that is allegedly taking action in support of the demonstrators who are more inclined to the independence of Hong Kong from China.