BNK48 scandal Kaew and why she got suspended by management 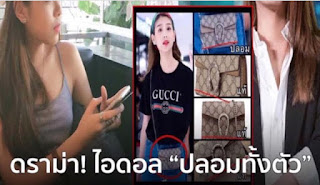 Member of BNK48, Kaew, has just been suspended from the group for one month because she was proven to be wearing unauthorized goods, aka non original stuff.

The case of using KW goods by Kaew has been going on for a long time, but the peak occurred yesterday because it had become a hot topic by fans because media coverage.

BNK48 considers Kaew's attitude as a bad example for young people and therefore, Kaew is given a punishment by management.

The purchase of copy goods is indeed an inappropriate action because it harms certain brands, moreover she is a public figure with a higher income.

Then what are the KW goods that have been used and owned by Kaew?

Let's look at Kaew's items that are considered KW by net citizens and media that Shukan Bunshun has compiled for our loyal readers!

The KW watch used by Kaew during a live broadcast on BNK48 Digital Studio.

The watch is thought to be an imitation because it does not match the original brand.

An imitation watch from the well-known brand 'Aquanaut' is considered net residents have differences in the picture above.

Besides that, Kaew's sling bag, which was just viral yesterday, like the picture above, is also KW.

Then there is the famous Nike brand shoes that Kaew wears are replicas.

Nike Air max97 Silver Bullet has a difference in the picture above between what Kaew used with the original picture.

The logo part used by Kaew is not red while the original must be red.

Then there was the white CHANEL shirt, which looked different from the original collar Kaew was wearing.

However, who would have thought she used a lot of replicas of popular brands.

This made fans quite surprised because Kaew was indeed seen showing off her wealth.