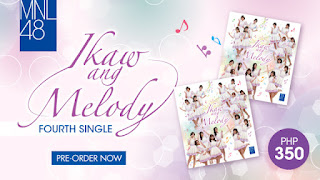 Today MNL48 announces that the fourth single title is Kimi wa Melody or in Tagalog namely 'Ikaw ang Melody'. This single is the result of the second general election (MNL48 2nd General Election) which was held on February 28, 2019.

This announcement really surprised fans, because the idol group from Manila, Philippines also released the single Ikaw ang Melody. This single can already be ordered at the Mall Online buying and selling site HalloHallo.

The song Kimi wa Melody MNL48 itself will be delivered first on July 26, 2019 as the debut of the fourth single. There are three songs with the bonus off vocals that fill this fourth single.

The single's main song is Kimi wa Melody (Ikaw ang Melody) which was delivered by senbatsu cs. Two coupling songs namely 'Gingham Check' sung by Under Girls and 'So Long!' the senbatsu member brought. This single is sold for 350 PHP or around Rp.95,713.00. A little more expensive than JKT48 singles on the market. By buying MNL48 singles you also get a bonus which is a ticket for a handshake with members.