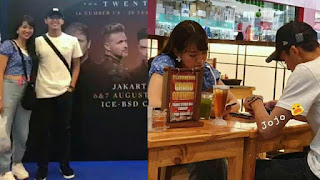 Former member of the JKT48 idol group, Shania Junianatha or Shanju, were seen shopping in the mall with a man who was none other than Jonathan Christie or Jojo.

The Indonesian national badminton athlete was spotted by the community together with Shania while visiting ICE BSD City, Tangerang.

Second, like people are dating, watching movies and eating together. This makes fans both speculate that Shania and Jojo have indeed been dating.

Jojo was still shy to admit his closeness at that time. However, now Shania has graduated from the group so maybe both of them will 'go public' alias openly.

Surely this makes Jonathan Christie's fans broken hearted because he was so idolized by women in Indonesia. And today Jojo and Shanju announced that they both had committed to get married. The marriage between Shania Junianatha and Jonathan Christie will take place in the next few months after the two get engaged. "Kami berdua akan menikah (We will both get married)." says Jojo on his Insta Story.