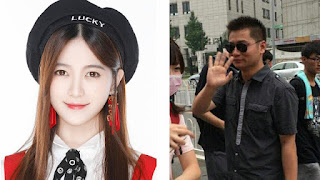 Chen Meijun BEJ48 received a red card from management for being involved in a scandal relating personally with her fans.

This scandal is quite unique because the fan who contacted him was a rich uncle. As the general name of an established man who is in a relationship with a beautiful girl and meet their needs without marital status is called sugar daddy.

It seems like Team B fans have smelled this scandal long ago. The sugar daddy Chen Meijun, according to fans there, often donates donations to the Chen Meijun election and Request Time for Team B.

The donations distributed are not playing around, look at Chen Meijun's election ranking results in the 2018 elections. This sugar saddy turned out to be familiar, in fact he often attended the BEJ48 and SNH48 GROUP events.

He often watched theater performances and also watched SNH48 GROUP concerts and came shaking hands with Chen Meijun. Even the photo above shows that he once did a 2shot with Chen Meijun herself.

Meanwhile, SGO48 member Kaycee condemned Chen Meijun's behavior and considered that it was very fatal and could worsen the group's overall reputation.