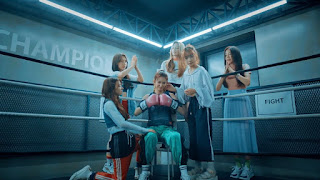 Woolim Entertainment has created an SNS official account and Youtube Channel for the newest project girl group "Rocket Punch" on July 22 and on July 23 they released the 1st teaser concept on the official youtube channel "Rocket Punch".

Their video concept featured the girls in the flower garden, including the Takahasi Juri in it. Last year, Takahashi Juri participated in a reality show collaboration program between South Korea and Japan "Produce 48", which combined several trainees from idol agencies in Korea and several members from 48 groups.

This event gained high popularity in Korea. And on March 4th, Takahashi Juri decided to graduate from AKB48 and joined Woolim Entertainment's agency for idol debut in Korea.

And also there are Kim Su Yun and Kim So Hee who have participated in Produce 48, also debuted with the same group. Woolim Entertainment, has debuted its first girl group, "LOVELYZ" which has been successful until now. For the date of Debut, surely "Rocket Punch" will still be announced later.

Most beautiful Rocket Punch members (in no order)