Rich Brian and JKT48 are set to perform together 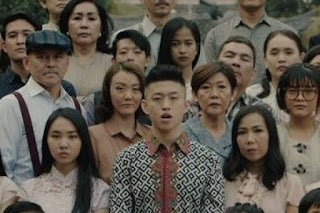 The most eagerly anticipated day from Rich Brian finally arrived. Yups, especially if it's not the album "The Sailor". The success of the previous "Amen" album made the works in "The Sailor" highly anticipated by lovers of world music.

This album has several singles that have been released in advance including "Yellow" and "Kids", where both have been streamed more than 25 million times globally.

Brian increasingly confirmed his name as a Singaporean musician who managed to penetrate the international market. Hmm, wondering what kind of creative process is until the latest "Dat $ tick" singer song line? Take a look at the following facts.

In the midst of a busy world tour, Brian still took the time to prepare album material, you know. This is evident from "The Sailor" whose recording process was even carried out in three locations namely New York, Los Angeles, and Singapore.

This long hard work produced amazing results with mature song material and lyrics that not only told Brian's life story, but the song that was expected to inspire all children of Asian blood without exception Malaysia and Singapore to not be afraid in achieving their dreams.

Even the 88rising musician received praise from Bekon and the team. "Brian is an ideal example of bridges that we can build when we share ideas between cultures and countries to create something influential, which is able to inspire a new generation to work without fear," said Bekon & The Donuts.

"In just three days, we have created approximately 80 ideas with Brian, he is really an artist," he continued. Wow, it looks like their chemistry is really intertwined in every song "The Sailor" which does not rule out the possibility of the birth of other cool works in the future.

Not alone, Brian also invited other young musicians to collaborate with each other which increasingly made "The Sailor" appear colorful. For example, in the song that became the highlight in the summer of this album is "100 Degrees", "Where Does The Time Go". In this song featuring labelmate 88 Rising Joji and "Rapapa" which has a proverb on the verse part of Wu-Tang Clan who is the founder of RZA.

A mature and unique concept has always been part of the works of 19 teenagers this year. He presented "The Sailor" as a form of appreciation for oneself and would be a witness to the journey of his music which had fallen into disrepair.

"The Sailor is a symbol of being an explorer. Exploring a region that is alien and through life and curiosity. It's also about my story and also the stories of immigrants who dare to go out into a new world to look for an opportunity to make their lives better," Brian explained through the release received by the editor, Friday (7/26).

Well, getting here makes you more impatient to listen to "The Sailor" all the time right? The following is a list of 12 songs that have been released. 1. The Sailor 2. Rapapapa (featuring RZA) 3. Yellow (featuring Bekon) 4. Kids 5. Drive Safe 6. Confetti 7. Vacant 8. No Worries 9. 100 Degrees 10. Slow Down Turbo 11. Curious 12. Where Does The Time Go (featuring Joji).

Always success for Brian. Seeing the enthusiastic welcome of young people on their latest work, will this teenager from Singaporean be back to hold a world concert? Let's wait for the good news.