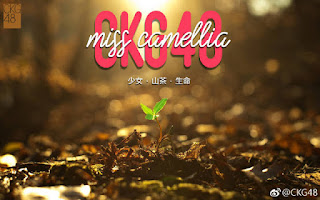 "They were never said it was disbandment, but yes the SNH48 Group shuffle affected its sister groups like disbandment." wrote local journos.

SNH48's youngest sister group based in Chongqing, CKG48 was reportedly dismissed on January 2019. The group's last activity immediately stopped suddenly and all its members were sent to SNH48, BEJ48, GNZ48, and IDOLS Ft. But, both SHY48 and CKG48, groups does not close all Weibo accounts and their official sites.

Even SIBA STAR48 opens opportunities for other companies to work together to rebuild groups outside Shanghai, Beijing and Guangzhou. This is what makes fans think that SHY48 and CKG48 will rise again from dissolution. Fans also consider only the second team of the group who disbanded not the main group.

Today March 1, 2019 CKG48 Weibo was suddenly active and made its first posting after it was "disbanded". The group uploads the photo above followed by a sentence. "In the midst of fog among the mountains, I took my dream,". CKG48 also writes three pieces in the uploaded image. The word is not SNH48's slogan as usual 'Dream - Sweat - Effort'.

Fans guess these three words are a code a.k.a puzzle from CKG48. In addition, they wrote Miss Camellia which is the name of a flower. Camellia flower is Chongqing's national flower. Fans suspect that this group will be born with a theater that was moved from Guori. Chucha which means tea is considered the code of the new CKG48 theater.

At the same time, this or next weekend Siba responed to AKS overseas franchise like Team SH by restoring SHY48 with "SHY48 Team SY".