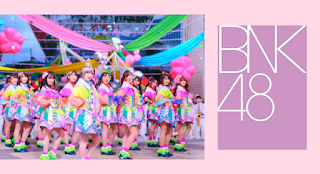 At the handshake event of BNK48 fifth single 'BNK Festival' in BITEC Bangna was announced the title of BNK48's second album 'Jabaja'. Previously this group from Bangkok had released their first album titled 'RIVER'. Jabaja which will be the main song on BNK48's second album is an adaptation song from the AKB48 51st single with the same title and was released on March 14, 2018.

The first Senbatsu for the main song is Bamboo and Gygee. The center will be held by two people, Fond and Pupe who will also be the first center.

BNK48 also announces pairs of songs that will be on Jabaja's second album. The second track song this time is a new song titled 'Reborn' which is an AKB48 adaptation song in the single Kibouteki Refrain and sung by Team Surprise.