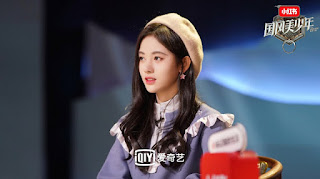 Solo artist who is also a former SNH48 idol group Ju Jingyi was recently rumored to be part of a famous survival event in China.

The program is none other than the second season of 'Qing Chun You Ni' which will begin later this year. The event will be attended by 100 female trainees from various agencies to be debuted as a new girl group.

This news came after a Chinese gossip account revealed the program's confidential information.

iQiyi is indeed close to STAR48 and even some Ju Jingyi films have produced collaborations with the platform.

One of the iQiyi varieties that has made Ju Jingyi a mentor is The Chinese Youth / Guo Feng Mei Shaonian.

The iQiyi program has always replaced mentors since Idol Producer until Qing Chun You Ni.

The girl who is often called Xiao Ju and Kikuchan is indeed a popular idol in China who is very good at acting, dancing, and singing.

If Ju Jingyi is a mentor, she will teach her juniors from SNH48 GROUP. SNH48 GROUP has stated participating in this Qing Chun You Ni Season 2 program.

This was announced at the SNH48 6th Idol Annual General Election concert in July.

Reportedly SNH48 GROUP sent 7 members to participate in this program. Wow, how will they react later if they really will meet Ju Jingyi as a teacher?