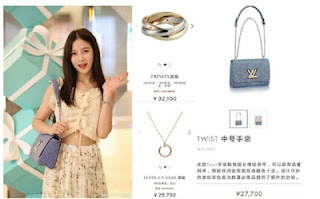 One BEJ48 member, Chen Meijun, has been given a red card by management for violating SNH48 Group artist rules. This happened because Chen Meijun had a personal communication with fans.

It is known that the girl who is often called Mimi has a male fan who likes to give her money or better known as sugar daddy. This incident was revealed in 2019 because the man with the pseudonym Mr. X was exposed to the public.

Mr. X admitted that he often gave large amounts of money, even thousands of USD and other valuables. This money was used by Chen Meijun to buy expensive outfits that fans began to suspect.

Chen Meijun was found to have not only played sugar daddy once, in fact this was done when she was still a member of the disbanded idol group "1931". Even because of this she was also kicked out of the group. Then what is Chen Meijun's fashion style from her beloved scandal sugar daddy?

Branded bags, purses and rings at fantastic prices are often worn by Chen Meijun. For example the Twist bag she uses for 27,700 Yuan or around 5000 USD. Her JUSTE UN CLOU necklace is even more expensive at 5900 USD and the most expensive TRINITY ring costs 7600 USD.