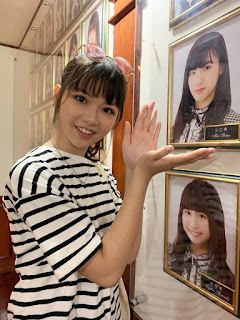 Anh Sang hit by scandal, the SGO48 member watched the Pajama Drive show at AKB48 Theater today and took a photo with the members who performed, including taking a photo at the Shitao Miu frame (Team 8).

She has been rumored to be a scandal dating a man who took her to Japan. Anh Sang, until this news was published, has not issued an official statement.