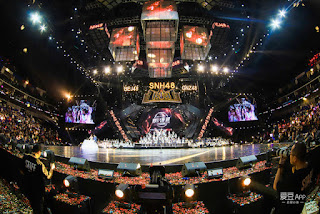 The SNH48 idol group along with its sister groups BEJ48 and GNZ48 after holding an annual election event or senbatsu sousenkyo last July.

The concept of the new single SNH48 election results are indeed very much awaited by fans. Starting from the kingdom, magic, and princesses.

Then what are the songs and concepts for the new single from the sixth general election? SNH48 has just registered 3 songs that are expected to fill their new single.

These three songs are songs from each electoral group namely Senbatsu (Top Girls), Under Girls, and Next Girls.

The three songs are You Ni (有 你) which means 'Owning You', Shijian de Ge (时间 的 歌) with the meaning 'Song of Time', and Yong Bu Yong Gan (勇 不 勇敢) which means 'Dare to Not Dare'.