JKT48 Senbatsu Sousenkyo 2019 how to and who you should vote 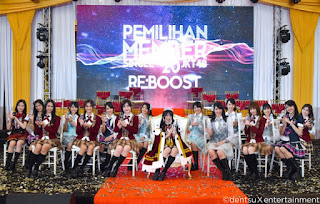 The selection of JKT48 Single Members or Senbatsu Sousenkyo has indeed become a frightening and thrilling specter for both members and fans.

They fought together to win the seats contested by all candidates. Not infrequently the money and energy is spent for the sake of fans's oshimen get into the top 16 seats or senbatsu.

However, it is not uncommon for many members to swallow bitter pills many times because they cannot be elected in the election.

The senbatsu position is very coveted by the members. In order to enter the senbatsu members also have to work hard and are willing to sacrifice their time.

Being a senbatsu makes all members compete to be elected. Not all members in 48 Groups can easily taste into single senbatsu.

The following are members of the old generation of JKT48 who have never been in the ranks of senbatsu singles until now.

Nadila is the only remaining second generation member who has never entered senbatsu. From entering generation 2 in November 2012 to August 2019, they never sang the main song of JKT48 single.

Sisca with her melodious voice and vocal turned out to have never entered a single senbatsu either. However, she has been pushed as a solo singer from JKT48.

She often adapted several Indonesian and foreign songs that are often uploaded by JKT48 on her official Youtube channel. Siska is one of the 3rd generation (since March 2014) that has not yet entered senbatsu.

But however, she is always cheerful and often follows variety shows on TV. The owner of the longest name in JKT48 has also never entered the ranks of senbatsu.

Known by her father, Desy JKT48 turned out to be a cheerful, beautiful, and tall girl like a model. She even has programs on TV like Takeshi Castle.

Surely there are some people who mengidolakn isn't it? If you enter senbatsu it will definitely have a good impact for JKT48.

Angel is also a 3rd generation member who has never been senbatsu. She has been a member of Team T since the formation of this team.

Even though she was close to Haruka, in fact she was unable to lead her to be elected in the senbatsu ranks. She is a dream girl of gamers because she can be invited to be interested in it because Angel is in the JKT48 sub-unit 'Valkyrie48'.