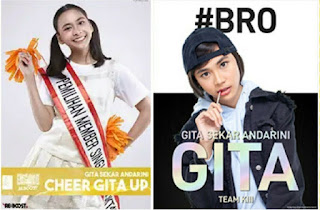 JKT48 member Gita Sekar Andarini has announced her graduation from the group.

This was announced by Gita during the Team theater show which was held tonight.

In her announcement, Gita revealed it's not because of scandal.

"I have something to say to all of you. I, Gita Sekar Andarini, will graduate from JKT48."

Regarding the reason for her graduation, Gita said, "Until now I kept trying to reach the highest place in JKT48, but lately I started to think about what I want to do in the future. Therefore I decided to graduate and concentrate on my education. "

Regarding her graduation schedule, Gita revealed, "I haven't decided on my graduation theater performance schedule, but the plan will be held in next month. So I won't participate in the tour announced some time ago, but I still want to work together as Team until the end. I will be very happy if you continue to support me until the end. Yoroshiku onegaishimasu."