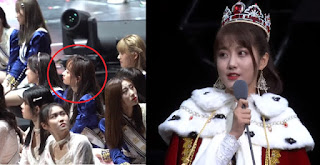 The Moment of Kahuang (卡 黄) is always awaited by fans of SNH48 GROUP. Ka Huang is a dream couple that juxtaposes Baifaka (Li Yitong) and Huang Tingting.

The two members of the second generation were indeed very romantic, but in the last few years the two were involved in a feud so that the two teams were separated by management. In the sixth SNH48 election yesterday, Li Yitong returned to number one like last 2018.

Huang Tingting who was ranked two years ago must now swallow the bitter pill with no rank at all. Not only Huang Tingting, but the whole generation of two original Team NII did not rank. Only Li Yitong himself won the victory.

The moment when Li Yitong delivered a speech was indeed very much awaited by all members of SNH48 GROUP. However, there were also fans who highlighted the reactions of SNH48 members who listened to Li Yitong giving a speech.

Moreover, KaHuang fans highlighted Huang Tinting's reaction at that time. Seen in the video, Huang Tingting was very flat and her face had no reaction, just looking forward. However, at the end of the speech Huang Tinting gave applause for her colleague. She also had time to talk to a colleague beside her.