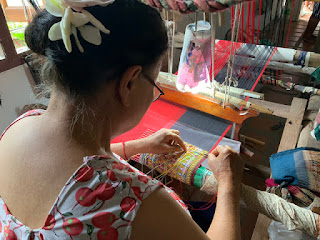 He wrote that BNK48 was ordering a Chiang Mai woven cloth to the weaving craftsman there.

This weaving craftsman is a group that also makes some clothes for traditional Thai drama namely Klin Kasalong.

In his writings, he also explained that BNK48 ordered quite a large amount, at least 25 of them.

However, it is not yet known in what order this large order.

Some BNK48 fans linked this to the uniform of their sister group that will debut, CGM48, based in Chiang Mai.

As you know, CGM48 has finished selecting members of their first generation.

The final stage of the CGM48 audition was over.

Fans consider that this woven will be used by members of the first generation of CGM48 when it is introduced to the public.

This was because at the time of the last press conference, the group leaders and members sent in, Izurina and Aom, were wearing traditional Chiang Mai traditional clothes.

Meanwhile, from the photo, we can see that the woven fabric has a bright red color with a slightly complicated motif. This process is still quite long because the weaving process is still done traditionally.