BNK48 suspend Kaew activities on and off air 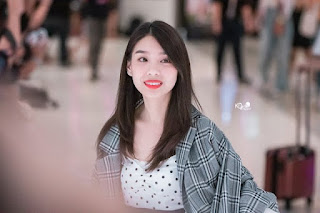 BNK48 member Natruja Chutiwansopon aka Kaew is suspended by the management for a month. Starting from August 20th until september 20th.

She is suspended on using social media and any activities with BNK48. 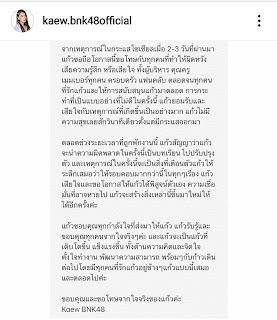 The reason of suspension is because she use immitation product and the management evaluate her action as it will show bad example for fans & society.

BNK48 has just issued an announcement in the form of punishment in their official social media account today.

This announcement contains funding for penalties for new members involved in the problem.

Kaew was suspended for one month from BNK48 because she was found to be using unauthorized / non original goods / product.

Kaew, the first generation member of the Team BII, was highlighted by the media about the fashion she was wearing.

In the photo on the media mentioned that the goods worn by Kaew are not original or official of the brand.

Management considers that Kaew's actions are not good and can tarnish the good name of the company.

The suspension of Kaew from BNK48 will take effect from tomorrow August 20 to September 20 2019.

Therefore, Kaew will not participate in the group's activities during this period including the BNK48 sports event which will soon be held in the near future.

Kaew's position as team captain at the sporting event will be replaced by Pun.