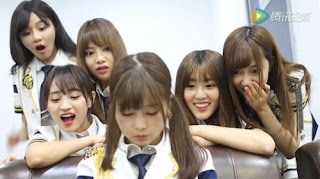 The legendary member of the second generation SNH48 who is also a friend of Ju Jingyi, Luo Lan announced that she will get married this month.

This news is known from the upload of SNH48 members in her Pocket48 chat room. Zhao Yue, Lu Ting, and others revealed that Rola would get married the day after tomorrow on August 18, 2019.

Zhao Yue, Lu Ting, and the other second generation told their fans that their fellow students were getting married. Even happier, they were invited to come to Luo Lan's wedding.

They will not only perform but there will be a special appearance for the second generation members. This moment might be used by the SNH48 pioneers for a reunion.

Possibly Luo Lan also invited other former second generation like Zeng Yanfen, Meng Yue, and Gong Shiqi. Wan Lina, Lin Siyi, Zhao Yue, He Xiaoyu permission to the fans if they are absent from the theater for a while. Congratulations to Luo Lan, SNH48 member who is the shortest in history!