JKT48 Team T prepare Seifuku no Me setlist for 4 months 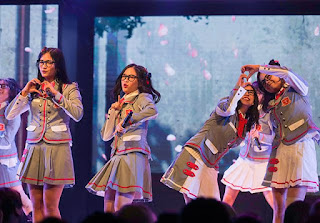 The wait of Team T to get the original theater setlist (not derived from seniors at JKT48) ends Sunday.

That afternoon, 17 Team T members led by Captain Ayana Shahab brought their own setlist, though its still owned by Japanese group.

Namely, Seifuku no Me or Tunas di Balik Seragam which was popularized by SKE48 in October 2009.

A decade later, JKT48 Team T had to bring the setlist.

Complete with excitement, energy, and high leaps from the choreography.

One thing that had become a burden for the members of Team T.

Because, fans who have long loved the 48 Group must have judged SKE48 as a benchmark.

Realizing it's not easy, Team T has prepared the setlist since June.

That means, most of members not only have the obligation to fast.

Therefore, physical strength is the main foundation for the success of the Tunas di Balik Seragam setlist that is draining.

Because of the importance of physical training, management does not provide choreography classes before the foundation of energy is formed.

"Starting from the setlist, the jump can't be as high as now. Objection on the body, "Ayana added.

Other members agree. They say, when SKE48 brought this setlist to injury.

That is why, it took up to 4 months to prepare Seifuku no Me.

"The most difficult thing was jumping. SKE48 members can jump as high as that. We really tried to jump that high. Because, fans will definitely watch SKE48 and have high expectations." said Lala, a 7th generation member who is believed to be the global center of this setlist.

The shonichi (first day) performance was a success.

They managed to bring 16 songs well.

Physical training is encouraged since Ramadan has been arranged until the show ends.

Chant continued to shout, combined with a lightstick swing to make the atmosphere of a full house theater really lively.

Especially when the 12th song, the Lagu Sahabat was sung. All fans joined in the singing.

The show was a success. Nevertheless, Ayana did not want to rush to be satisfied.

"There must be a drawback. I don't want to be easily satisfied. Moreover, this setlist will be sung for a long time. Surely we continue to process to be better, "said Ayana.

According to Ayana, one of the keys to the success of the show that night was the members who enjoyed it.

Compared to the dress rehearsal, he said the atmosphere was completely different.

"We really enjoyed bringing this setlist. Moreover, when fans join in singing in the 12th song, " she explained. 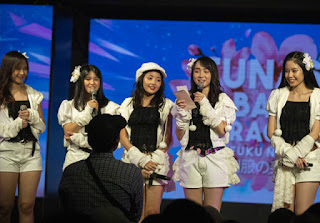 Proof of Events Some time ago, it was busy on Twitter about fans who were tearing up Team T.

The setlist was expected to make fans' views change.

Because, the ability of the members of Team T in JKT48 is increasingly tested.

"Through this setlist, after seeing us, try to change its view in a more positive direction, '' explained Ayana.

She further explained, all teams have advantages and disadvantages.

But, she does not know why there are fans who always see the shortcomings of Team T.

Ayana said, the criticism was heard. But that doesn't make Team T down.

Zara, Lala, and Jinan invited fans or those who wanted to get to know the new Team T to watch the performance Tunas di Balik Seragam.

’’We do it from day to day. This setlist is also a sign we have come out of the comfort zone. If we are usually cute or funny, in this setlist it will be various, '' said the film star.

As for Lala, she was excited because this setlist was original for Team T.

Therefore, she wanted to celebrate with fans.

What is Jinan's opinion? The preparation Tunas di Balik Seragam is something fresh.

’’This is the new face of the new Team T. Center, and many new children are also here, ’’ she said.

The emergence of a new setlist can be utilized to bring a positive impact to the election results later.

Because, curious fans have a great opportunity to watch the Tim T theater show.

Just how the members take advantage of that opportunity.

Even though fans were briefly criticized, Team T has a strong support base.

That was proven during Request Hour 2019, Tim T's song managed to become number one.

It is not impossible, this will be repeated in the next JKT48-style Election.

Lala hopes that in the Senbatsu Sousenkyo many Team T members will enter senbatsu or undergirls later.

"Hoping everything is numbered. We have really tried this setlist. With all my might and all my heart. So, hopefully the fans can support us, " she said.

Jinan also believes that the setlist that was introduced before senbatsu sousenkyo was also confident that it could boost the votes of Team T members.

According to her, Team T had brought the Te wo Tsunaginagara setlist for a very long time.

Fans can be bored. "Now the new setlist. Fresh We display something different. Hopefully the fans see our efforts, " she concluded.