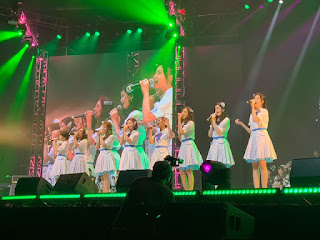 In the performances of each 48 groups, MNL48 sang their songs and other songs in the a cappella version.

After being uploaded on Chinese social media, a lot of praise came to this idol group from Manila.

Many compliments also came from SNH48 Group fans which incidentally are different from AKB48 Group which is an MNL48 unit at this time.

A fan account that talks about SNH48 uploaded a video of MNL48's performance singing 365 Nichi no Kamihikouki in the Filipino national language version, Tagalog.

Some praise comments for MNL48 were obtained from SNH48 fans.

"Switching to the full version, this is amazing," wrote the fan.

"This live version is amazing! This is a strength that a female idol singer must possess," added another fan.

"This is very good," wrote the fans.

"When can I see my river (SNH48) doing a cappella once ?," taunted fans to their favorite group.