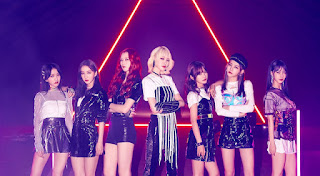 The group with KPOP style will be released on August 30, 2019. Although their EP title is DEMOON, there is no song called 'DEMOON'. The word DEMOON itself consists of two words namely DE and MOON.

DE is derived from Latin which means 'far from' or away from, while MOON means the moon. The meaning of DEMOON is "every girl does not need to depend on moonlight (outside) to shine, each of them is an individual who can shine independently".

SNH48 states the concept of this sub unit is dark style. This EP contains 3 songs with very different styles. The song includes 'Huli (狐狸)' which means Fox / Fox, 'Wo Jiu Shi Wo (我 就是 我)' meaning I am Me, and 'Chudian (触电)' which means Electric Shock.

The EP contains 1 "DEMOON" CD, 1 lyric book, 1 photopack, and 1 handshake coupon. Buy 7 EP will get member signature and buy 14 will get 1 2shot coupon.

In the context of promotion, DEMOON will conduct a showcase tour of the four group cities, namely Shanghai, Beijing, Guangzhou, and Chongqing.

The show in Shanghai will take place at Bandai Nanmeng Palace Shanghai on September 15.

The second city of Chongqing is in the temporary theater CKG48 on September 21, 2019. Beijing and Guangzhou will be located in the BEJ48 and GNZ48 theaters in October and December.