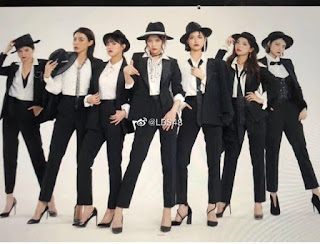 7SENSES officially announced that they will soon make a new single comeback. This has been announced in their official Weibo account @SNH48_7SENSES.

They will be scheduled to be in Korea from the end of August to the beginning of September 2019.

On August 26th, the seven 7SENSES members will leave for Korea.

They will receive their fourth single training from August 27 - September 1, 2019.

After their practice they will do a filming MV on September 2-3, 2019.

On September 4 there will be a signing event and brand activities.

The first 7SENSES showcase abroad will take place on September 7, 2019.

Members will return to Shanghai on September 8, 2019.

It is not known this time the Korean language will be released. or not. But it seems the concept this time is black and white.