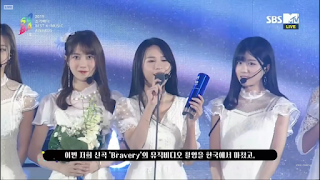 The event was held for 2 days but SNH48 entered the line up that day.

The SNH48 members who attended were the TOP 32 (Under Girls) this year's election which was also in the framework of the MV filming process in South Korea.

They appear to entertain the citizens of Korea with a new song.

The song that was sung was a new song in the election result singles by Under Girls titled 'Yong Bu Yong Gan (用 不用 干)' or 'Bravery'.

Not only performing, SNH48 also won an award at the SOBA stage this year.

Previously, their sub-unit 7SENSES won the same title in 2018.

Qian Beiting as the TOP 32 center as well as a senior expressed her joy at the award award and expressed her deepest gratitude to the fans and their agencies.

The crowd of SNH48 fans in South Korea is also not inferior to other idol groups when they make award awards speeches. Apparently not a few fans of this idol group from Shanghai, China.