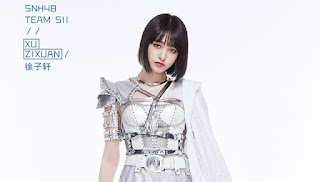 In this post, it was unexpected that Xu Zixuan also changed his official Weibo username from @ SNH48-XuZixuan to @ 络 遥 Haruka.

"I'm still alive, I will continue to live. Only in the future is there no snh48 relationship with Xu Zixuan. Before my love is completely ruined by reality. Let me say goodbye first. The girls, it's not easy to be a good girl and good to be dedicated to SNH48. Be gentle to them, they are very good, very good, " she wrote saying farewell.

She also stated that she left the DEMOON sub unit.

Regarding the September tour in 4 cities, she will not participate it because she has already decided to leave.

However, Xu Zixuan will still be filming this year's MV Next Girls in Beijing.

It seems that Xu Zixuan was experiencing depression and exclusion by SNH48 staff.

According to her statement she felt left behind by the blackness of the staff who called her mentally ill.

"Rumors are developing in the company, after returning from South Korea, I was told by other unrelated staff (DEMOON) that I said that 'I' committed do that in South Korea. I am thinking about this, why, why," Xu wrote Zixuan After returning to Shanghai after training with DEMOON, Xu Zixuan visited the doctor several times.

Doctors have often asked her to rest and change jobs. Her treatment so far will be affected by the stress experienced if Xu Zixuan continues in the group.