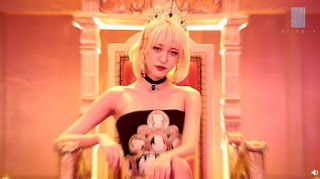 Some time ago, SNH48 fans were surprised by the goodbye-message by Xu Zixuan from their favorite group.

This made some fans very sad because this girl had just debuted in SNH48's new sub unit 'DEMOON'.

Zixuan even changed the name of the Weibo account from 'SNH48-XuZixuan' to its famous name on a live broadcast platform.

After changing the name, she wrote a post related to DEMOON.

She asked for permission not to attend the DEMOON sub unit tour in the future aka the temporary hiatus from the group due to her physical condition.

Some time ago when declaring out of SNH48, Zixuan admitted that she was depressed during the group.

"Due to personal physical reasons, it is not possible for me to participate in sub-unit future activities within a certain period of time. I regret the impact that I have on this sub-unit. I hope everyone can continue to support and love the six members of DEMOON. I also hope that all people can enjoy this new sub unit. I wish you all happiness and good luck, I hope DEMOON becomes better and better, " Xu Zixuan wrote.

Following this post, the official DEMOON Weibo account responded that Xu Zixuan would not take the tour of the four subunits of the city which will be held in September.

This makes fans worry about the mental state of the idol. Even so, Xu Zixuan's DEMOON debut single teaser MV special teaser has been uploaded.