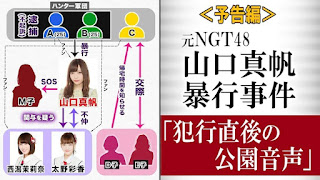 The names of two NGT48 members associated with Maho Yamaguchi's attackers along with evidence that one of their friends was involved in a romantic relationship with an underaage member are revealed in an extraordinary 50 minute audio recorded by a member who came to aid Mahohon.

Marina Nishigata (23) and Tano Ayaka (22) are mentioned by the attackers, though the scale of their involvement with them is unclear, as is the fact that another member tipped off the two attackers indirectly (and probably unintentionally) about Maho Yamaguchi's return home.

The other (underage) member of NGT48 (referred to as E) is mentioned a lot as being in a relationship with a friend of the attackers.