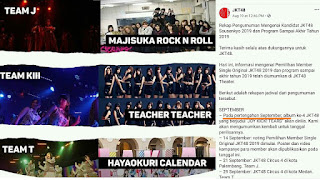 But several weeks have passed until now in early October the fate of the new album is unknown until now.

It has been more than two weeks since the planned release, JKT48 did not provide information regarding the release of the album Joy Kick! Tears.

The physical album has been in a long time even though it will be included in the voting bonus for selecting an Original Single Member.

In this album, JKT48 inserts 3 new songs and old songs that have not been released by the studio.

Of course the slow release has disrupted this mutual comfort.

Events like this are indeed common in JKT48. Even in previous singles new fans received singles that have been released a long time ago.

Even though it has been RE: BOOST, JKT48 must act quickly so that fans are not disappointed with the service of their favorite group.