BNK48 fans laughing at Cake due to her actions 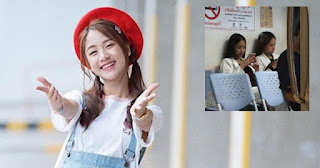 As quoted by Mthai.com, former BNK48 personnel Nawaphon Chansuk 'Cake' submitted a report of defamation to the police on Monday.

This defamation case began with a social media page that spread about Cake.

Accompanied by her sister, Cake refused to conduct a news interview.

Rumors about her personal life were illegally obtained by CCTV footage and then distributed freely on social media.

According to Cake's information, it does not only target the spreaders in their defamation.

Police Lieutenant Natthachai Chalerm initially received the report before the supervisor's report and coordinated the investigation department to examine the person responsible for further investigating the case.

Previously, Cake was caught up on that hilarious scandal with a man on hotel lift and tunnel. Several pics were uploaded by fans on social media. BNK48 fans were laughing at Cake and her boyfriend.