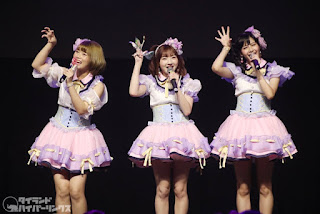 The first sub unit of BNK48 named 'MIMIGUMO' after making their debut today.

This premiere was performed in a special performance at the 2019 Nippon Haku Bangkok event.

This sub-unit consisted of three first generation members who were also members of the Team BIII namely Music, Kaimook, and Jaa.

In the performance, the three members performed three songs adapted from AKB48.

With the concept of this cute and cheerful sub unit, the song is delivered not far from cheerfulness, love, and pleasure.

One song, Warukii, is performed solo by Music.

This sub-unit was indeed announced the previous month.

They were also revealed to be bringing new songs that had never been adapted by BNK48.

After appearing, the three members of the sub unit received greetings and bouquets after their debut.

But behind all that, the next step is not yet known about this sub unit.