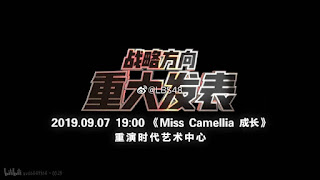 CKG48 has just announced the schedule for the show in September 2019 yesterday.

This announcement was followed by a video uploaded by management.

In the video contains an important announcement that will be delivered by management.

Usually if the announcement of a new member will only be given a silhouette of members.

So what will be announced by CKG48 is very much awaited by many people.

This local Chongqing group has experienced average development since its rise from the disbandment last January.

Many C-netz on Weibo expect this big announcement.

Some say that CKG48 will announce the formation of sub-units that have been done some time ago.

There is also a guess that the fourth generation CKG48 audition will be held.

"CKG48 is a local Chongqing group that is completely independent. The relationship with the SNH48 group is only business cooperation. All activities are proceeding as usual, there are no violations," joked a netizen who guessed this announcement was CKG48's independence from SNH48.

The sentence above was made the same as SNH48 when deciding independently of AKB48.

Besides, it's even funnier, a netizen guesses this announcement is the joining of CKG48 to AKB48 CHINA.

Others predicted the announcement of the first single, the first original setlist, and the first CKG48 sister group.