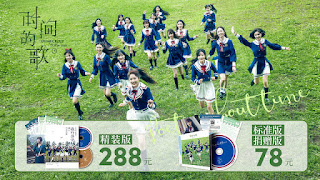 The single was released digitally yesterday.

This single will be released in four types or versions.

The first version, the Hardcover Type, will go on sale on September 23, 2019.

Type A and Type B do not differ much only the release date and type of CD cover.

As usual, SNH48 also releases donation types that do not contain CDs but other contents are not much different from Type A and B.

It's just that each type of donation will be available exclusively EP or single envelopes.

Even so the price of Type A, B, and Donation is the same, which is 78 Yuan while the hardcover is 288 Yuan.

The song will consist of only three songs, Poetry About Time / Shijian de Ge (的间 的 歌) by senbatsu, Yong Bu Yonggan (勇 不 勇敢) / Bravery by Under Girls, and You Ni (有 你) by Next Girls. Purchases can all be made at the SNH48 shop site and the group theater base.