Fans urges Kato Minami graduation from NGT48 due to this thing 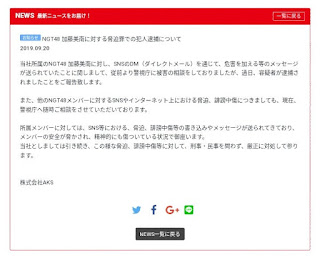 AKS said that the person who had threatened Kato Minami (NGT48) via SNS had been reported to the police and had been arrested. AKS will also report all acts of threats, accusations and slanders against other members.

Angry fans claim AKS not doing the same thing for Mahohon back then, only makes them ignore the AKS threat and urged Katomina's graduation.