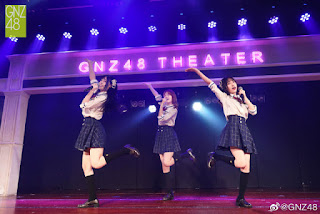 There were 3 members who were introduced to fans at that time.

Interestingly, there was only one GNZ48 member from the audition results yesterday.

The seven generation GNZ48 members consist of only one person, her name is Wu Siqi.

Her status is now a core member but has not been able to enter into team formation.

Wu Siqi will enter the team judging by her progress in theater performances.

Besides Wu Siqi, there were two other members who made it to GNZ48.

One of them is a member of IDOLS Ft, Si Polin, who is the third generation of SHY48.

She was promoted to Team Z's formation at the time.

She officially entered the Team NIII formation with proof of group group surrender.

Jiayin is one of 5 members of SNH48 GROUP who was sent by the agency to go to Korea for training.

She was a member of Team G at the time but now returns to GNZ48 with promotion to Team NIII.