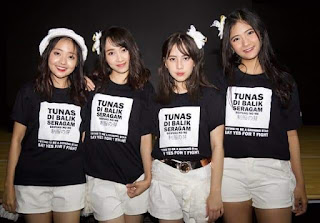 Sunday was a special day for Lala. Not only because of her team, the JKT48 Team T displayed their first original setlist, titled Seifuku no Me (Tunas di Balik Seragam).

More than that, the member who owns the name Nabila Yussi Fitriana is believed to be the center of the setlist.

Being a center in a 48 group environment is indeed special.

Including, for the theater setlist.

Being in the middle of the 16 members who appear to make that position becomes very strategic.

Fans can easily see the figure of her idol-aura because it is not blocked by other members.

The more special because Lala appeared to be a theater center setlist when she was in JKT48, it hasn't even been one year yet.

For information, the 18-year-old girl was introduced as a member of JKT48's 7th generation at the Kachuusha / Uza Everyday single festival handshake on September 27, 2018.

Is Lala a center because by chance many Team T members will graduate?

Team Captain T Ayana Shahab made sure it wasn't that simple.

According to Ayana, there are many reasons for choosing the girl born in Lampung, 29 December 2000 to become a center.

Ayana said, Lala's outstanding ability had already been seen when she performed on the Te Wo Tsunaginagara setlist  (Team T's setlist before SnM).

Lala, who was previously at JKT48 Academy Class A, is a backup of Team T.

"Although from the 7th generation, but the performance is already very good," said Ayana.

This information was reinforced by the opinions of fans and staff alike.

According to him, many fans who put their hopes in Lala were given more opportunities.

"When performing together, we cannot see directly. Staff and fans say Lala is good and can be a center, "Ayana said.

Not only that, Ayana who is a first generation member of JKT48 also admires Lala's voice.

According to Ayana, Lala's voice was very idol.

She was even more amazed because when the rehearsal of the Seifuku no Me setlist, Lala was memorized.

"If the dress rehearsal, initially cheated via mobile phones. But, she (Lala) doesn't. From the small things he seems intent, "said Ayana.

It is not impossible if Lala will become a JKT48 center.

The JKT48 member who starred in the movies like Dilan, Keluarga Cemara, Dua Garis Biru, and Ratu Ilmu Hitam, also witnessed how Lala was very serious at JKT48.

’’From the training, there was already intention. During vocal training too. Seriously that's what can make us believe (Lala can be a center), '' she said.

Zara also said, although many in the Team T will graduate, fans no need to worry.

Because, management must prepare the best as a substitute.

’’Whoever it is, management will not just choose either. Who will be suitable to replace us, '' explained Zara.

As is known, Zara is also one of the Team T members who has announced graduation.

Aside from Ayana and Zara, Jinan also spoke out about Lala who was believed to be the center setlist of the team.

According to her, Lala deserves to be a center for doing something in JKT48 from heart and sincerity.

Moreover, the performance and dance are good.

'Not like a new kid. The voice is beautiful. Very idol. New members usually memorize it for a long time. But, Lala is not like that, '' said Jinan.

Lala herself was confused.

Why, she was finally chosen by management to be the center of Team T's new setlist, because this would be her first experience as a center.

'At first I felt, how come I was chosen. Can you do it later? I just entered very, '' said Lala.

However, she still carried out the task.

Luckily, the seniors in Team T gave her full support. That made Lala excited. ''We both have the desire to make Team T who is already good, getting better,'' she said excitedly.