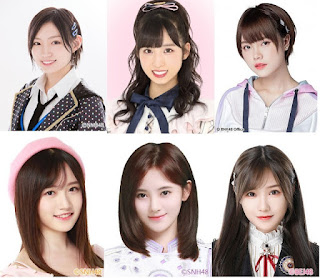 The beauty of an idol is indeed an additional value to attract the charm of the community.

Even in South Korea, almost all idols in girl groups have faces like nymphs and bright skin.

Well, the visuals of the 48 Group members we know are also no less interesting.

Some members of the 48 Group even became the talk of net citizens because of this extraordinary beauty.

Well, this time we will introduce members of the AKB48 Group and SNH48 Group who have the most interesting visuals of the community based on fans popular opinion.

Here are the members with the nickname 'an idol who appears hundreds to thousands of years'.

BNK48 Music. The BNK48's first single center does have a strong idol aura.

Her performance on stage is always energetic and her adorable behavior attracts many fans.

She managed to get ranked in the AKB48 world election for the 53rd single.

A Japanese magazine called her an idol girl who appeared in 600 years.

Ju Jingyi. Good at singing, dancing and acting, cute and adorable behavior with this super beauty that Ju Jingyi has.

This girl was the talk of Japanese citizens at the time.

She was the second most popular member of the generation at the time.

Netizens call her as an idol who appears 4,000 years.

Proven now she is very popular in China and her beauty is recognized in TC Candler for the 100 most beautiful faces in the world.

Fei QinYuan. When shee first appeared as a member of the fifth generation, indeed Fei Qinyuan attracted the most SNH48 fans.

Following Ju Jingyi, her beauty and cuteness get the grace as an idol that appears 4,000 years.

The official followers on Weibo are already over one million and overtaking their former seniors.

Ota Yuuri. The member of the NMB48 idol group based in Osaka is not agile in a variety show.

Initially Ota Yuuri was an ordinary girl, since she cut her charm hair more and more radiated to the fans to call her a girl who appeared once in 10,000 years.

Oguri Yui. Her innocent behavior when filling various television shows makes anyone interested in her especially in her beauty.

One of the members of the Team 8 representatives of Tokyo Prefecture is the best-selling fill the weekly magazine model.

She also briefly became the star of a drink advertisement in Indonesia.

She was praised as an idol who appeared in every 20,000 years.

Su Shanshan. The girl from the Beijing idol group was indeed interesting when she first appeared in the promo video for Team E's debut theater performance 'Pajama Drive'.

But who would have thought she was praised by Japanese citizens who called her a girl who appeared once in 40,000.

Now she is often elected in the SNH48 general election overtaking senior members.