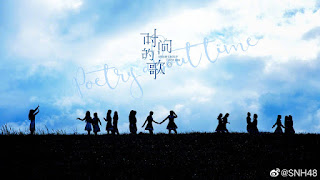 The good news, the new single SNH48, the sixth election result, will be released this month.

Through its official Weibo account, SNH48 announced that the song Poetry About Time will be in two days, exactly 16 September 2019.

The concept of the single has been revealed by the image above uploaded by SNH48.

Although released this month, the election result will be SNH48's first single released without the queen aka center.

Li Yitong as the winner of the election officially graduated from SNH48 on September 13, 2019.

The shooting of the MV single Poetry About Time has been carried out in the land of the rising sun aka Japan.

SNH48 members will appear in new uniforms with views of Japan's autumn.