Produce 101 China 3rd season is ready, and its not Produce 48 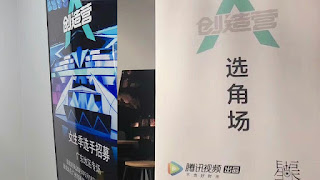 The popular survival event in China 'Produce 101 China' has given birth to national idol groups such as Rocket Girls 101.

After the success of the second season under the name 'Produce Camp', the third season has now been prepared.

This is known from the recruitment of artist players by Tencent.

Someone on the net has uploaded a photo of the player selection on Weibo social media.

Suddenly this makes the audience of national producers very happy to hear this news.

But unique, if the original Korean Produce 101 program applies 'Produce 48' as the third season, apparently Tencent did not do the same thing.

A photo uploaded by the netizens said that the third season program was still under the name 'Produce Camp'.

But this third season's Produce Camp will be attended by female trainees. Written in the picture above is Nushenh Ji XuanShou Zhaomu (女生 季 选手 招募) which means 'Recruitment of Women's Season Players'.

It is likely that if Produce 48, Tencent will have difficulty inviting AKB48 Group Japan to work together due to visas from the Chinese government.

In addition, 48 Groups in China were faced with two choices, namely SNH48 GROUP or AKB48 CHINA.